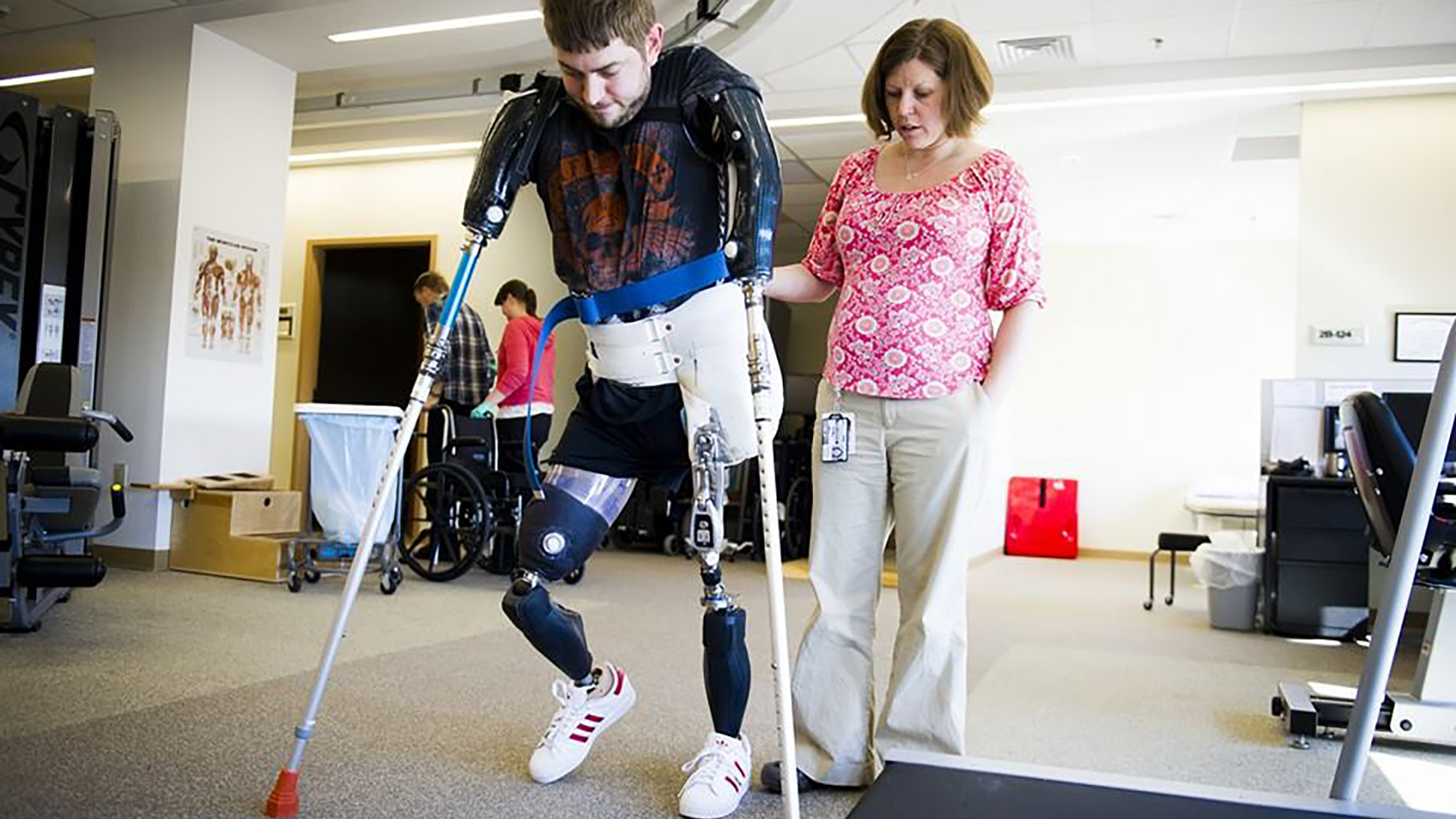 In 2010, Sgt. John Peck was serving in Afghanistan when he stepped on an IED and triggered an explosion that would change his life forever. The resulting blast amputated his legs, part of his right arm, damaged his left arm, and caused third-degree burns on his stomach.

As a result of complications from surgery, doctors were forced to amputate part of his left arm, making him the third quadruple amputee of the Afghan and Iraq wars. In August 2016, Dr. Simon Talbot, a plastic and reconstructive surgeon at Brigham and Women’s Hospital (BWH), led a team of 60 surgeons, nurses, and technicians for a 14-hour bilateral arm transplant. After a 2-week BWH stay and a short SRH inpatient stay, Sgt. Peck began outpatient therapy at SRH. There, he’s working with physical and occupational therapy, working on core, upper back and shoulder strengthening, as well as getting to use his new upper extremities for self-feeding and brushing his teeth.

Dr. Crandell has had the opportunity to work with Sgt. Peck over the past 2 months and was able to discuss his progress and how physiatrists can get involved in these types of cutting-edge opportunities.

Tell us about your role with Sgt. John Peck. What’s your experience been like? What are the next steps for Sgt. Peck? Can you tell us about the treatment plan you led?

Dr. Crandell: VCA stands for “Vascularized Composite Allotransplantation.” You’ve heard of kidney transplants, etc., but the idea of taking whole tissues is cutting edge. Boston is a leading center of excellence for VCA. The BWH has done several face transplants and both the BWH and the Massachusetts General Hospital are now doing hand transplants. The BWH has now done 4 bilateral hand transplants. Sgt. Peck contacted the BWH VCA Program because he was interested in getting a leg transplant, a novel program, which has IRB (Institutional Review Board) approval to begin performing this experimental procedure. No leg transplants have been performed yet, but the screening of potential candidates is ongoing. Sgt. Peck opted to have hand transplants, first.

After the Boston Marathon bombings, SRH worked with a large number of young traumatic amputees, all shared with the medical and surgical teams from Boston’s five level 1 trauma centers and Boston Children’s Hospital. This led to increased communication, cooperation, and understanding of the role of post-acute care, rehabilitation, and PM&R. At the same time, there was a growing understanding that advanced rehab has to be included in order to have a successful, expanding VCA program. Several individuals from SRH were asked to participate on the BWH VCA team, representing physiatry, therapy, and rehabilitation engineering.

When I see a typical new amputee evaluation, one question is prosthesis? Yes or no? When I see a potential leg transplantation candidate, even deciding what questions to ask is challenging. This is a new area of exploration. Why haven’t they done leg transplants before? As a general rule, people feel that lower limb prostheses are pretty good. There is some sense that you can replace that functionality.

VCA is not “lifesaving”—like a kidney or heart. This is more related to function. Three years ago, a patient had leg transplantations performed in Spain, but the patient had issues with immunosuppression, requiring re-amputation. Leg transplantation has not been performed in the United States. We have to ask: Have they maximized the current standard of care (i.e., really optimized well-fitting, lower-limb prostheses)? This is the practical side. Then there is another side: patients have reported that “I want to put my feet in the sand, and feel it.” Not yet available to them with conventional prostheses.

Sgt. Peck has always wanted to be a chef. He wanted something more. In August, he got the “call” and rushed to Boston and “got the hands.” The BWH had done 3 other bilateral hand transplants, but this is the first time that they sent the patient directly to SRH—now part of the VCA program. When he was an inpatient, he was a “standard” patient—wearing his upper limb splints, receiving range of motion, trying to learn how to avoid injuring his new hands during bed mobility and transfers, and getting daily labs to closely monitor his immunosuppression levels.

To create Sgt. Peck’s outpatient program, which required daily PT/OT and continued daily blood draws, including the weekends, we had to work with nursing, the lab, pharmacy, etc. to get everyone on board. To communicate with the expanded outpatient team regularly, we have held weekly outpatient team meetings, which includes the BWH staff. We now include therapy staff from Walter Reed on the weekly call to improve Sgt. Peck’s planning for his transfer there in early December. The things we are doing now—the experience, processes, etc.—will really set the stage for us to work with more VCA patients like him (including veterans) and future lower limb allotransplantation.

Everything has gone pretty smoothly. When I saw John’s hands for the first time…I really couldn’t believe my eyes. Literally, there is an emotional response—a knowledge that Sgt. Peck truly understands the sacrifice of the donor and donor family, and he is incredibly grateful. He knows about sacrifice.

How do physiatrists get involved in cutting-edge opportunities like this?

Dr. Crandell: You have to show up—you’ve got to be in the room where it happens. You have to be keenly aware of opportunities to collaborate with a growing number of clinicians and researchers who are discovering the value of the “physiatric perspective,” experience working with a team. The only time when true interdisciplinary rehab happens—is when everyone is in the room working together. Also, having a sense that this is important stuff and what we do, makes things possible. Creating success with this program is going to make working with the first leg transplant easier. Not easy, but easier.

We are only going to be able to continue to work with Sgt. Peck until December.  Now with 1 patient: we have 3 institutions, multiple disciplines working together…It’s a unique patient population—small…but it demonstrates the vision, technology, and dedication necessary for successful functional outcomes. His story is an example of what is possible.

So what has it done for you? For your program?

Dr. Crandell: Opportunity…opportunity to work with an incredible individual, at a pivotal time, with an expanded interdisciplinary team. There was risk—we could have failed at our role and they could’ve pointed the finger (no pun). People also saw the story in the news. If you work at Spaulding and see your patients’ success being highlighted on the news, it makes you feel good. To know that the institution is doing good things, serving our veterans, it’s an internal boost for everyone. To see rehabilitation featured as playing an important part of the role in the transplantation process…better inter- and intra-hospital communication and teamwork. It’s a plus for interdisciplinary rehab!

Physiatry is more than a handshake. It’s an agreement that you are going to work over time to meet a goal. It’s a partnership.

Thank you to Dr. Crandell and Spaulding Rehabilitation Hospital for sharing this incredible story.

If you would like to submit your personal story as to why you became a physiatrist, or you have a noteworthy patient story you are able to share, click here to submit it today.